Unexpected circumstances thrust the most unlikely of fellows into
danger and intense adventure that will determine the fate of realms.

Fate of Realms is a riveting other realms fantasy story. It will grab your attention and delight your reading fancies. It is a complex adventure with twists of mystery and numerous intriguing characters.

The prophecy by blind and aged Hewbra Hamky was cryptic: &quot;I name the boy Jafner, Glowing One, for I see a star shining in a dark, dark sky. This child is destined to rise above all others born in the Vaile. Darkness will billow forth and seek to whelm him. Yes, the darkness will touch this child, but by the power of his hand he will sweep it aside. Before him lies greatness!” Years later, on her death bed, she would charge the now grown Jafner to journey to the Felding in an unknown distant realm. 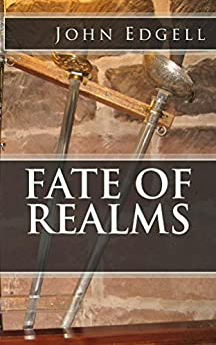 Because of the nature of his birth Jafner was looked on by the people of Farhill as a death child. Furthermore, the old woman’s prophecy given at his birth became the impetus for his being the butt of jokes and much ridicule since he ended up being the town chimney sweep.

Coinciding with Jafner’s eventual decision to journey to the Felding a mysterious and unnerving otherworldly man appeared in Farhill, referring to himself as an eelan and espoused a strange religion. The man took a special and menacing interest in Jafner.

Jafner sets out to find the Felding, but finds himself immersed in a perilous adventure that will determine the fate of realms; realms inhabited by a variety of intriguing characters and extraordinary creatures.

At its heart, Fate of Realms is a story about fidelity to what is right in the face of the impossible. It exemplifies faithfulness to the truth no matter the cost.