Tarnished Crown is mesmerizing Christian fantasy fiction. It is fantasy in the form of a Christian allegory in the tradition of Pilgrim’s Progress, although more modern in approach.

In this Christian allegory the protagonist, Pip’pt, is what is known as a “miffit”—on the order of a hobbit but a bit taller with more hair on their hands and feet but less on their heads. Pip’pt lives in Jubilee, and has a marriage that is less than ideal. In spite of his gentle, patient and caring attempts to make things better between him and T’rena, things go from bad to worse. Her selfish tantrums test his caring nature.

An unexpected visit by the King of the Realm of Hiz’onr, referred to in this allegory as Baruch, charges Pip’pt to with a seemingly impossible task, a trust he cannot in good conscience turn his back on. After all, Baruch is the King! 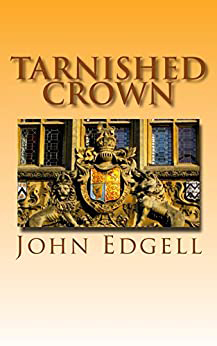 In this Christian allegory the King’s crown is tarnished and its jewels have gone missing. Pip’pt finds himself faced with the task of finding the gems and returning them to the King. However, his attempts to restore the King’s crown lead to enticements to turn aside, heartless brutality, and extreme peril.

Pip’pt’s adventure begins in a contest with Death. Here is a small taste of the drama of this captivating Christian allegory:

Pip’pit breathes heavily as he plods his way through an awful morass. It is awful because other than smelly, brown muck, there seemed to be only greenish-yellow, dead-looking swamp grass. A heavy dark mist shrouds the seemingly endless, reeking bog.

The iron ring clamped around his neck has nearly chaffed the skin raw. He is a slave of Death, and it is Death who had sent him out into the Miremarsh, a swamp on Slave Island, somewhere in the midst of the Sinful Sea. “I am tired of you, Pip’pt, so go from my presence. Cross the Miremarsh,” commanded Death with a laugh. “If you find your way to the other side I will grant your freedom!”

Pip’pt wanders the intolerable morass for days, feeding on things too appalling to mention, helplessly lost, and fighting to keep from sinking to his death in the mire. He is faced with choices: Death versus life; hopelessness versus meaning and purpose. So begins Pip’pt’s daring and dangerous quest to restore the King’s tarnished crown.

In this thought provoking Christian allegory Pi’pit is an everyday fellow who struggles with feelings of failure and insecurity. “Who am I to restore the king’s crown?” We might ask the same question as we face the stuff of life while feeling much the same, “Who am I?” But in Christ I am somebody and so are you. He is not looking for greatness. What God looks for in our lives is faithfulness, so the allegory has to do with an everyday guy who in spite of his struggles with inferiority and apparent failure is faithful to the task set before him.

In this story Christian fantasy reflects the moral realities faced in our world today.