Coming of the Drake

A devil drake wreaks death and destruction on the realm of Amora. The sage Astrakon gathers the leaders of the varied people of the realm for a conclave at Eeden, for something must be done! To the surprise of those gathered, Astrakon chooses seven of the most unlikely warriors to track down the drake: a miffit, three elves, a dwarf, a man, and a mudfuddle, all looked upon as misfits.

In the midst of their quest, Cole and Marisaa discover that the drake is a minor problem compared to an evil that plots the subjugation of the realm and the destruction of all that is good. But for the evil to succeed, the amulet of power, the Black Heart, must be wrested from Cole, for the Black Heart controls the three star gems stolen from Baruch, the Maker of Realms. And so the chosen warriors, Cole, Marisaa, Kanaraa, Aarol, Rogan, Korak and Boggy find themselves drawn into the final clash of the forces of good and evil, the Dragon Horn War. 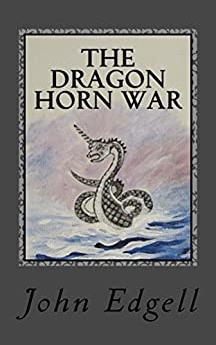 We are going to where this trail takes us.