The sun slipped behind the horizon. Draug whispered in a voice not his own, “The world was yours, but now it is mine, all mine!” Draug’s sister laughed. Draug turned, his face livid. He struck her to the ground.

Vile creatures, danger and death infest the Mines of Maarog that border a realm ruled by an evil warlock who serves the Lord of Darkness. Prince Aargon of the Realm of Faadora flies an airship across the Great Divide to investigate mysterious happenings at the mine. Meanwhile, Draug, the warlock, is conspiring to usurp the Faadoran throne.

When the prince is not heard from, Rhafe, the prince’s page, and Aanora, the prince’s daughter, set out on a quest to find him. Pursued by assassins, their quest takes them through the strange and dangerous lands controlled by the warlock. 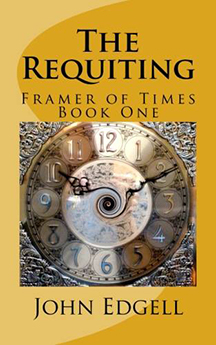 The Requiting is a story of intrigue, betrayal, danger and death, with a touch of romance.